On Friday, April 23rd, Parnassus scholars and staff celebrated the 457th birthday of one of the greatest writers in the English language, William Shakespeare! Staff and students recognized this fun and special day honoring the Bard with costumes, performances, and learning more about Shakespeare and his works through lessons and read-alouds. 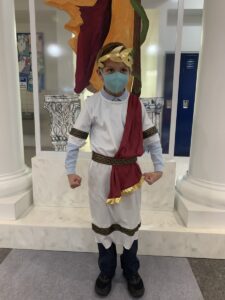 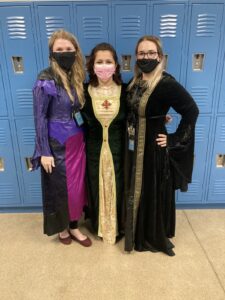 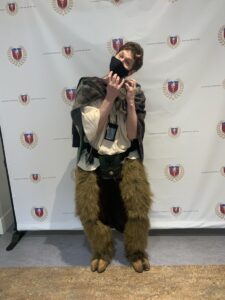 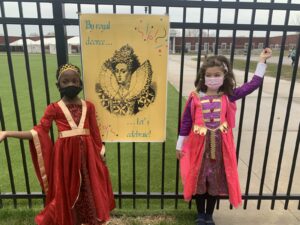 Shakespeare’s Birthday is one of Parnassus’ all-school dress up days, where students have the opportunity to swap their uniforms for a fun and creative costume! Scholars and staff dressed in period-appropriate clothing, as would have been worn in Tudor England, or as characters from Shakespeare’s plays. Our hallways were filled with kings, queens, and princesses from the late 16th and early 17th centuries, as well as the Weird Sisters from Macbeth, Julius Caesar, Cleopatra, fairies from A Midsummer Night’s Dream, and more!

As part of our celebrations, scholars learned about Shakespeare’s works and his influences on literature, art, and music! Our School of Rhetoric orchestra performed selections from the time period during dismissal, and Magistra Gottwalt, Magistra Neimeyer, Magister Sood, and Dr. Dean taught students about the bard’s influence on music during their general music, orchestra, choir, and band classes.

Students also enjoyed performances as part of our festivities! The Ravenscroft Musicke Guild performed vocal and instrumental music from Renaissance England for our students in the School of Grammar. Although the weather meant that our “roving minstrels” had to be indoors and stationary, we greatly enjoyed their performances and hope to have them back at Parnassus in the future!

Thank you to everyone who made this special day possible! We are excited to be able to continue this fun Parnassus tradition.