The School of Rhetoric scholars at Parnassus follow a college preparatory course of study based on the school’s Classical Trivium and liberal arts curriculum.

The rhetoric stage is the pinnacle of the Parnassus classical education. It is dependent upon and a continuation of the first two phases of the trivium.

The School of Grammar laid the foundation of knowledge; the facts and stories of history; the facts of science and mathematics; and the rules of phonics, spelling, and grammar. The School of Logic taught the scholars to think analytically, to evaluate the validity of arguments, to weigh the value of evidence, to see the interrelationship of the facts as they organize them in a logical sequence, and to begin their own journey toward independent thinking.

Armed with the knowledge and ability for logical argument, the rhetoric-level scholar writes and speaks with intelligence, confidence, coherence, and eloquence. Below is a brief overview of the School of Rhetoric academic program.

The  Humane Letters sequence begins in the First-Level of Rhetoric, following Parnassus’ structure of historical periods as the back bone of the curriculum, with an analysis of the ancient times, including Greek and Roman history and literature. The scholars continue their studies including a survey of the medieval period up to the early modern history and literature; an examination of American history and literature; and courses in American civics, economics, and government. In their Fourth Level Rhetoric capstone course, the students have the foundation, knowledge, and understanding to see the indissoluble connection between the core of a liberal arts education and liberty.

A science curriculum is of significant importance to the Parnassus classical education. A thorough study of the hard sciences, based on the conceptual understanding and experimentation, provides the students with necessary logic and reasoning skills. Further, such a science curriculum allows a student to question with greater confidence — the scholars possess a firm foundation from which meaningful questions arise.

All School of Rhetoric students at Parnassus will study physics, chemistry, and biology. The physics course starts with the analysis of phenomena in the real world and progresses through standard, important physics topics, emphasizing those that are most helpful for future applications to chemistry and biology. Chemistry students explore the interactions and relationships between atoms and molecules that account for chemical changes. The biology course begins with ecology, cells and genetics, organisms, plants, and animals form and function. This sequence allows the students to then move on to advanced science courses.

Throughout the courses, laboratory proficiency is fostered including: observation and analysis, oral and written communication, use of the scientific method, and creative problem solving. This approach persuades students to bring together diverse concepts in a practical laboratory setting.

In the Parnassus model of the classical Trivium, the study of mathematics follow the pedagogy taught in the three schools (Grammar, Logic, and Rhetoric) from foundational knowledge to logic and reasoning, proofs, discussions, and applied knowledge. The classically-educated scholar at Parnassus will have the opportunity to take courses in Algebra I, Geometry, Algebra II, Trigonometry and Analytical Geometry, Pre-Calculus, and Calculus with options for the Advanced Placement exams. Scholars will also have the opportunity to take other math courses such as statistics. Students are required to take three years of mathematics in the School of Rhetoric, but are strongly encouraged to take a fourth year.

School of Rhetoric scholars study and use rhetorical techniques in composition, written, and oral skills. The study of rhetoric formally begins in First Level Rhetoric and ends in the Fourth Level with the writing, presentation, and defense of their Thesis. The student who has established strong convictions rooted in a worthy education can now effectively communicate that knowledge and those convictions in such a way as to persuade. With these skills, the student becomes a stronger citizen and is able to argue on behalf of those ideals necessary for a free and moral society.

Quintilian’s treatise on the art of oratory wrote that “Since an orator, then, is a good man, and a good man cannot be conceived to exist without virtuous inclinations, and virtue, though it receives certain impulses from nature, requires notwithstanding to be brought to maturity by instruction, the orator must above all things study morality and must obtain a thorough knowledge of all that is just and honorable, without which no one can either be a good man or an able speaker.” The virtuous orator is core to the Parnassus Preparatory School graduate.

The study of the classical languages gives students access to ancient civilizations and their influences on other civilizations. In addition to accessing ancient civilizations as the precursors of the Western Civilization, the study of Latin and Greek also opens up an entire world of knowledge in the sciences, philosophy, law, and literature. For nearly two thousand years, the study of Latin has taught students grammar, vocabulary, and also the skills of careful reading and precise writing. For additional information, please see  Why Study Latin and Greek?

Each year, the Spanish program continues to evolve as the students gain additional skills by progressing through the classical program at Parnassus. School of Rhetoric students are required to study two years of Spanish for graduation. Students are strongly encouraged to elect additional Spanish coursework, especially considering the fact that many colleges require three to four years of sequential Rhetoric level language study.

Throughout history, visual and performing arts are explored and used to express the ideals or challenges of a culture as well as to entertain. As with other languages, the language of the arts also relies on certain rules, conventions, and vocabularies for its expression and communication. Artists and composers leverage the different ways to express opinions, feelings, and make statements. Therefore, the study of visual and performing arts at Parnassus equips each student with the ability to perform and create their own art expressions, but also to express well informed critiques.

Scholars are required to complete one year of physical education and health in the School of Rhetoric for graduation. Parnassus is delighted to inaugurate the “gymnasion” and have started to build athletic teams. Please see our current Extra-Curricular activities.

Parnassus offers a plethora of courses students may elect to study. Options include Art History, Philosophy, Principles of Computing, Psychology, Environmental Science, and Mock Trial, for example. To find out more about our courses and options, please make an appointment with the School of Rhetoric Principal by scheduling a visit. 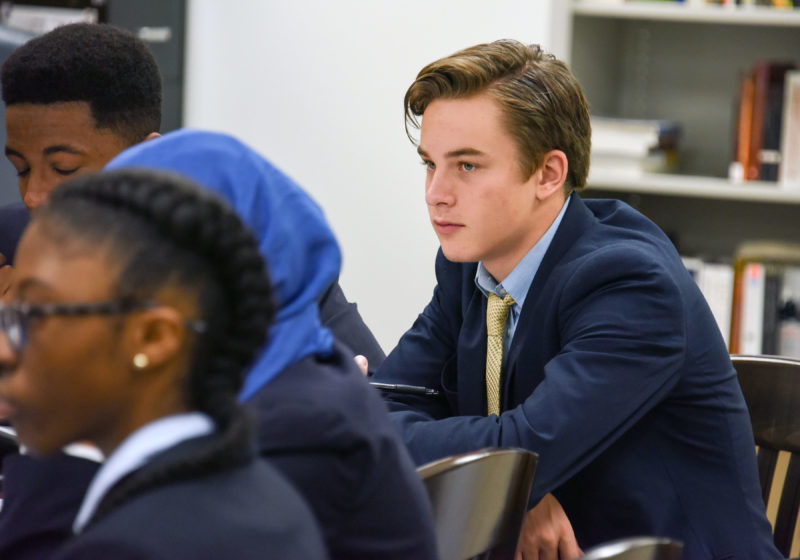