Latin instruction is offered at all grade levels at Parnassus Preparatory School. Scholars begin studying Greek in the School of Rhetoric. All students take Latin every year starting in Prima through First Level Rhetoric (1R). Two years of classical languages (for current students) in the School of Rhetoric are required for graduation. We believe there are at least four solid reasons for classical language study.

One’s reading, writing, and speaking of English is improved through learning Latin and Greek. Vocabulary is enriched, grammar is sharpened, and a sense of organization is instilled in the student. Greek and Latin equip a person with the strongest single foundation for mastering Romance languages, modern-inflected ones such as Russian and German, and even non-related tongues like Arabic, Chinese, and Japanese. Working with Latin and Greek broadens a person’s notion of structures possible in languages other than one’s own. In addition, Latin gives an individual a grip on about 80% of the vocabulary of the Romance languages — French, Italian, Portuguese, Romanian, and Spanish. About 800 million people in 57 countries speak these tongues, with Spanish being the official language of 20 nations; French of 27; and Italian, Romanian,and Portuguese of 10 other nations.

A background in the classical civilizations makes students aware of customs, values, and ideas that we have in common with Eastern and Western Europeans and with North and South Americans. Many concepts in government, religion, art, literature, and economics are shared.

When one is aware of the rich and varied culture of the Greeks and Romans, one is more likely to accept the differing customs and values of other people today. This holds true because through the study of ancient civilizations, one encounters exotic and extreme customs which were not static, but evolved over the centuries. When familiar with diversity, change, and longevity in one’s own culture, a person is more inclined to respect the views, ideologies, religions, and economic systems of others and to appreciate their rich, age-old traditions.

Studies conducted by the Educational Testing Service show that Latin students consistently outperform all other students on the verbal portion of the SAT.

“This student is likely to be disciplined, have a strong basis for further learning, be a little more creative towards intellectual pursuits than most.”

“Students taking Latin, are typically scholarly. They pursue academic study in the purest sense; they are not simply fulfilling an academic requirement.” 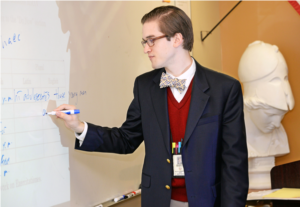